After just listening to David Foster Wallace’s 2005 commencement address to Kenyon College, I realize the dramatic shifts my thinking and way of living has gone over the past several years. Wallace states that sometimes, “The most obvious and important realities are often the ones are the hardest to see and talk about.” The “banal platitudes” of life are the ones that seem to be meaningless but happen “day in and day out.” Grocery shopping, the laundry, brushing our teeth— do we ever think about these things, or are these just the necessities that drive our life into seemingly endless tedium? Wallace starts his address by telling the “fish story.” Two young fish swim towards an older fish who nods and says, “Morning boys. How’s the water?” The two fish swim along for a bit and one turns to the other and asks, “What the hell is water.”

Graduating college in 2011, I, like most fresh college graduates sought to jump right into the workforce, make those big bucks, and REALLY enjoy the real world.  My frantic job search for two months landed me away from the pizza shop (shout out to Brenda’s Pizzeria, my place of employment for eight great summers) to a government defense contractor position working in Army chemical defense research (yea, cool stuff). This was an incredible opportunity to flex my research muscles and get some real world experience in the research field. With an incredible mentor and great team, I was able to do just that— attending several conferences around the country and even contributing to several papers that will be published in the near future. My love for science was being nurtured well, but an itch to get out into the world and immerse myself in new cultures had not fully been scratched. 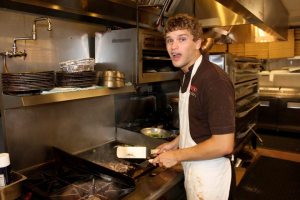 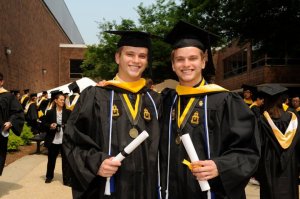 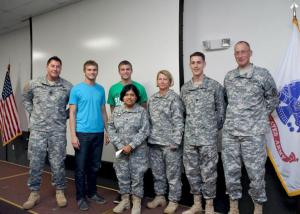 Welcoming ceremony at our research institute. Yes, Darryl and I ended up working at the same place. Great carpooling opportunity!

During my senior year at Towson University, I had the incredible opportunity to volunteer in Honduras with Students Helping Honduras/ Central American Children’s Institute. I fell in love with learning about new cultures, trying new foods (I love my baleadas and will eat them at any time of the day), and getting to know people from completely different backgrounds— travelers and especially the locals. After volunteering in Honduras in January 2011, I knew I had to go back and see the progress our chapter’s fundraising was making in the small village of Villa Soleada. Twelve boys were pulled out of an orphanage and put into a loving home. A brand new bilingual school was opened, and children who would have never had any, or very little, educational opportunity were learning English. I felt so alive when I was there, and the thoughts of that small village in rural Honduras still warm my heart, even thousands of miles away (check out our current fundraising progress for a girl’s home in Villa Soleada HERE).

Digging the foundation for a boys home in Villa Soleada. 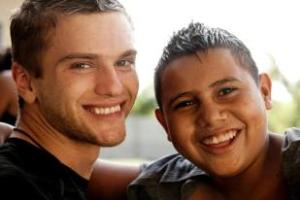 I continued to volunteer and travel to Honduras during my nearly two years working for the army, making a total of five trips from 2011 to 2013.  Every time I went back, I knew I had to go abroad long-term, but where? The answer didn’t come until hanging with friends in December of 2011 at good old Bill Bateman’s Bistro in Towson, one of my college town’s tamer and more relaxed sit down bars. Two of my friends excitedly told me about Alezandra Russell who they had just heard speak at their Non-Profit Leadership Conference about her work founding the organization Urban Light (UL). UL is

“a movement dedicated to restoring, rebuilding and empowering the lives of boys who are so often forgotten within the dialogue of abuse, exploitation and trafficking.” 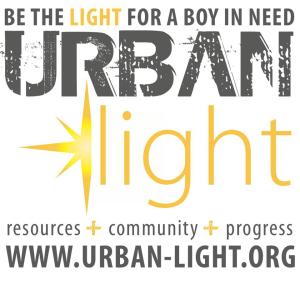 Having just been introduced to the realities of human trafficking and human exploitation throughout the world from several articles I had just read, I really connected with UL’s goals and the work the Alezandra and her team were doing. Even more interesting and compelling was that they were working with boys specifically. As UL’s mission states, these boys are often forgotten in the dialogue, and I had never previously heard of the problem of male exploitation before.

Urban Light sticker which can be seen all throughout Chiang Mai. “Baht” is Thai currency.

During her talk that my friends attended, Alezandra had mentioned that UL was interested in hosting long-term volunteers. When my friends told me this, a seed was planted in my head, and I didn’t stop thinking about the possibility of going to Thailand and working with UL. My twin brother, Darryl, had set his mind on the Peace Corps, but I still hadn’t settled on an abroad experience until one day in February 2012. I told my brother that I wanted to go to Thailand and work with Urban Light. A few days later, I sent in my volunteer application to Alezandra, and plans were set in place a year in advance for me to leave the comforts of home and family and give myself to a higher social cause. A renewed sense of control in my life spurred after the decision was set in place. I saved my money, read more books than ever before, developed a very strong meditation and yoga practice (and even worked at a yoga studio– shout out Sid Yoga), attended SO MANY live concerts, and connected with so many incredible people on the deepest levels. I can undoubtedly say that 2012 was the best year of my life, and I hope to live each year with as much vigor and spontaneity as I did in the past 365 days. 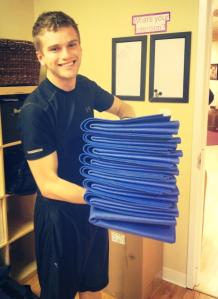 Stacking those mats at Sid Yoga in Towson! 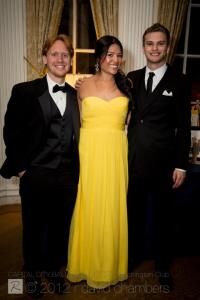 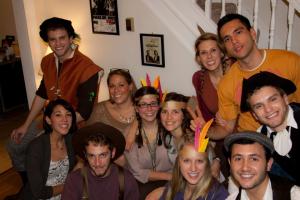 Some of the best people I know! We dress up for Thanksgiving.

Me and other members of the Maryland Rescue and Restore Coalition with Nicholas Kristof, Pulitzer Prize winning NY TIMES Journalist and co-author of “Half the Sky.” Such an honor to meet this man— he’s incredibly humble for being such a powerful force in bringing awareness to the issue of human trafficking and exploitation throughout the world.

I left the comforts of a stable paycheck, my family, and cold weather in the states at the end of March 2013 and quickly transitioned to repacking for my move to Thailand in mid-April (packing and unpacking a house in two days is NOT fun— thanks Rob, Blakely, Mom, and Dad for the help—and Lesa for the storage!) 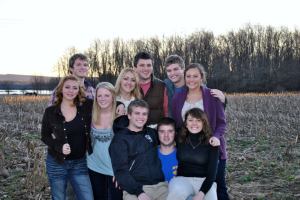 The ten cousins! We all grew up within half a mile of each other on the family farm. Fourth generation to live on that land. Best family ever!

And now I’m here in the “Land of Smiles” to volunteer with Urban Light for the next ~7 months. After about a month of goodbyes and last beers together with my closest friends and all of my family, a final farewell concert to raise money for Honduras, and all the hugs and great conversations, I finally made it (and definitely made up for all of the American craft brew I will be missing in this eight months— have a Flying Dog for me please!). Darryl joined me for the first stage of my adventure, as we won’t be together for quite some time (he leaves for the Peace Corps in July for 27 months). A flight mix-up and two tattoos later, we have started our longest stint of separation (our prior record was nine days— yea I know, I hang out with him a lot). But that’s what’s special about being a twin. Yes we get sick of each other sometimes, but it’s fleeting and doesn’t stop us from spending nearly all of our 24 years together side by side. The separation is kind of overwhelming to think about, but I am looking forward to the growth this independence the experience will bring us both. It will be kind of strange (and EXCITING) not having to argue over who gets to post which pictures (as they are usually always of the same thing— we like to avoid redundancy on your Facebook newsfeeds), to have different stories to tell, and new people to introduce one another to. Leaving all of my family behind is tough, especially after having never lived out of the state of Maryland—an 8500 mile leap!

Perhaps the one thing I’ll miss most is playing with my band, The Lake Effect. The feeling I get performing with my brothers and Dave, is unmatched by a lot in life. Our music has reconnected and connected me with so many people over the years and has brought together groups of my friends unlike any party or event that happens. It’s special.  I look forward to when we are together again, as our music is going to be informed by so much more. Killer sophomore release is in store! I have already stood in for a few songs at two Thai clubs and look forward to playing regularly here in Chiang Mai as a solo act.

Having just moved into the Urban Light Center last week, and strolling around local markets buying furniture and looking like a fool carrying a pile of brooms I thought would look cool on the walls of my room, I am finally starting to get settled, and Chiang Mai is feeling like home. There are so many new smells and tastes, but the newness of it all really makes me look harder and notice “the water.” The little things seem so cool as they are foreign, but they were always cool, just unnoticed! Buying groceries is an adventure, finding a toaster a victory. The “the day in and day out” in the states has become a small series of triumphs for me in Thailand.

My bundle of brooms.

I think it looks pretty cool.

My Thai is atrocious, but I make a point to always keep a smile on my face, as it really does go a long way. Walking the streets where no one speaks English, it’s almost all you can do to eliminate the alienation and loneliness that can overwhelm at times. It’s that reminder that we are all human and we are all in this thing together— a universal gesture that I plan to keep as a habit everywhere I go, even when walking the streets in America, where smiling is sometimes even frowned upon. And it feels great too to keep the optimism up and the spirits high of everyone around. Even those tuk-tuk drivers that ask one after the other if I need a ride get a smile with my head shake (I prefer the Songtaew or a long walk across town).

Yes, I’m in Thailand, and who knows where you might be. My life here might seem interesting to all of you, but know that yours is every bit exciting. Sometimes we just don’t take the time to notice.

Thanks to all my friends and family for their unending support in all of my endeavors. It means the world. 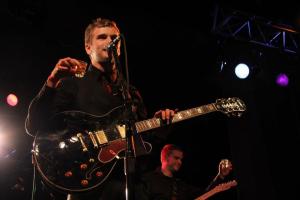 Goodbye and thank you cheers to all my friends and family at 2013’s honduROCK Fundraiser (Mar 29).