A few days ago my twin brother, Darryl, started his adventure with the Peace Corps in Tanzania, a reality that is still surreal in my mind and, I’m sure, in much of my family members’ as well. The longest D and I have been separated at one time (prior to me coming to Thailand) was nine days. Yes I know, out of 24 years of life, a little more independence should be expected, but we remained attached, and it always seemed right— our band, the classes we took in college (twin brother is the best lab partner for sure), being room mates— you get the point, we’re close.

Starting to rock at an early age.

Giving a caricature artist a challenge in Chicago. 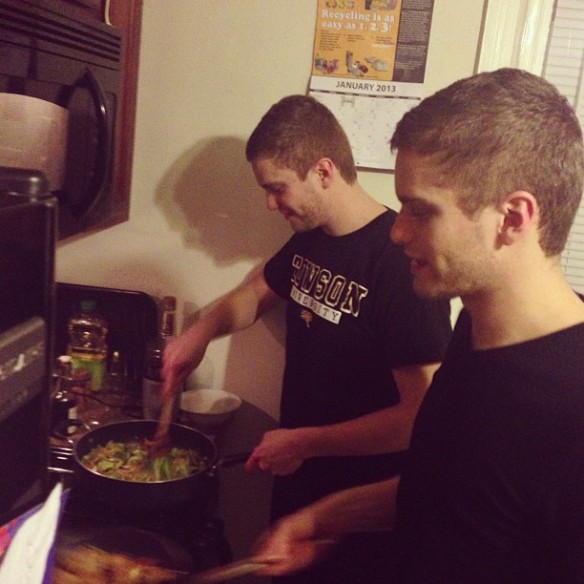 Cooking a feast in our home in Baltimore.

Darryl, Scott, and I hanging out with some elephants in Thailand.

Tanzania and Thailand are right next to each other in the alphabetical list of countries around the world. Coincidence? We’re always together somehow!

Anticipating our separation, we played with the idea of getting a tattoo to symbolize our connection. After much deliberation, we decided to settle on a chemistry themed tattoo (both of us are chemists and something nerdy would fit the bill). We reflected on our time in Towson’s chemistry program, and one of my favorite classes in college– Organic Chemistry (I know…). As the left-handed writer and Darryl the righty, the running joke in Dr. Rawn’s O-chem class was that Darryl and I were “enantiomers,” a term given to mirror image chemical structures. Growing up, another major distinction between the two of us came on the baseball field— we throw with opposite arms and bat on the opposite sides of the plate— one of the best chances of telling us apart when we were younger was when we had a glove on our hands or were up to bat. We are considered “mirror twins,” and enantiomer tattoos would be perfect.

Look into the mirror and say “Hi” to your enantiomer!

We ended up settling on glucose— the driving force in metabolism and energy production— essential for life and for human bodies to thrive. Darryl is a driving force in my life— inspiration, and partner in crime (being close twins is almost like what I imagine marriage to be like— perhaps more fun though). He is an essential piece of me, along with all of my other siblings and family of course (Blakely and Rob– which tattoos are we getting together??). Adding to perfection surrounding the use of an enantiomer chemical structure for a tattoo is that their configurations are distinguished based on the placement of molecules, receiving either a “D” or “L” label to characterize these molecular locations. Darryl and I conveniently happen to go by the nicknames “D” and “El” quite often among friends and with each other.

Enantiomers are often said to be “left” or “right- handed” indicating the D or L configuration.

We decided that I would wear the “D” configuration and Darryl would wear the “L”—  each of us on the other’s sleeve. We had planned on getting the tattoo done before I came to Thailand, but those plans fell through and the last chance we would have would be in Thailand during our last three weeks together. Months prior, I had submitted a post to Reddit’s r/chemistry asking for help with the design. A few users collaborated and came up something both Darryl and I were happy with. Here is the evolution of design (these are two separate pairs of designs): 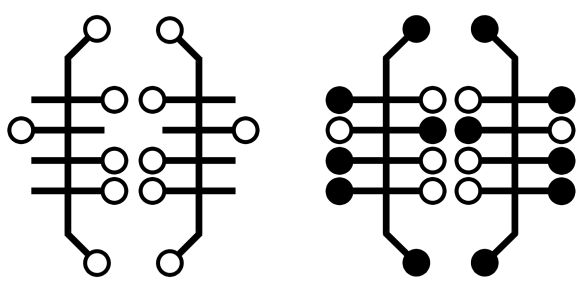 u/BantamBasher added to the design to make the glucose more recognizable. 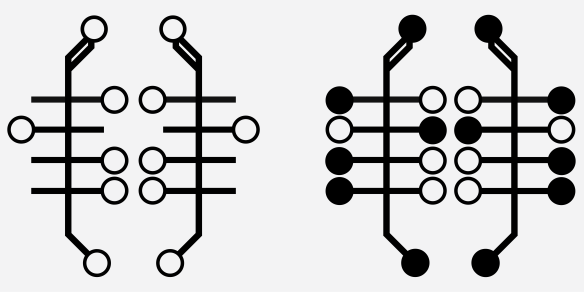 The double bond on the end was the cherry on top.

Our appointment was set for the morning prior to Darryl’s late night departure. The night before our appointment, we were relaxing and discussing what we would do that evening. Darryl’s casual look through his email fortunately made him realize that his flight was leaving in five hours— you lose track of time when you are in Thailand, which, most of the time, is a good thing. Frantic, we got everything packed and had one last night out on the walking street market before our separation would reach the most permanence in our lives. What do you say? What do you do? It was a confusing time, and to be truly on my own was something I have never realized— non-twins develop this independence certainly more rapidly than D or myself—- we never had to. 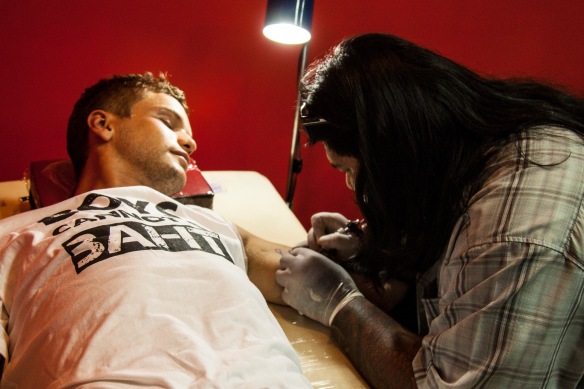 During. And yes, I made sure this place was clean before making the appointment— a new needle was shown to me prior to the tattooing. It hurt just a bit! 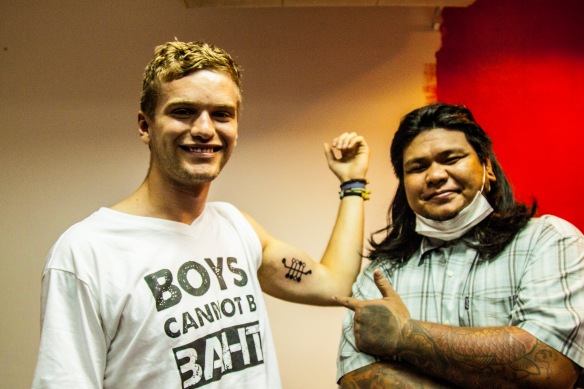 Our tattoos caught some attention on the internet and were featured in this Chemistry and Engineering News article (Volume 91, Issue 25).

Some More Reflections
I realize how challenging it must be for my family to let Darryl and I go off into the world, especially with having dealt with the pain of losing our Uncle Scott while he served in the Peace Corps in Togo, Africa. While on a hike with friends, he was tragically killed by a swarm of bees. He may have died before I was born, but he has always remained incredibly alive in my heart and mind, as my parents, aunts and uncles, and family friends have told so many amazing stories about his life and dedication to making the world a better place. The African drums, tapestries, and carvings I saw adorned throughout my home and other family members’ homes while growing up made me much more conscious of the world and the possibilities in life. The Lion King fantasized Africa for me— my Uncle Scott brought it to life. I always dreamed about traveling the world and having a big adventure– so glad it is coming true. 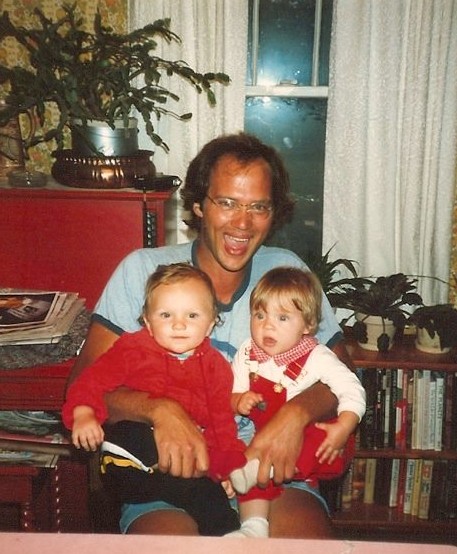 My Uncle Scott with my brother Rob and cousin Claire shortly before his trip with the Peace Corps to Africa. Uncle Scott was a recent graduate of Virginia Tech’s Veterinarian Medicine program and used his expertise in Africa to improve animal husbandry techniques in local agriculture.

Growing up, it was always instilled in me to give back to your community. Whether my parents were taking me on walks along Rock Lodge road to pick up trash or having our annual lemonade stand at the end of our driveway to support Hooves for Happiness, giving has always been a part of my family’s ethos.

I recently read a letter written to my Uncle Scott’s best friend in Africa shortly after his funeral in Bittinger. The end of it puts things into words better than anything I could ever do:

And now the torch is passed.

I know my Uncle Scott is in me and all my family, and though his life was tragically lost, his influence and spirit carries on through us. To live life with the intention of “mak(ing) this world a tiny bit less imperfect” is what we should all strive for. It is truly a privilege to be here in Thailand working with Urban Light and I am truly content, despite the challenges associated with the work and being far away from the comforts of home. I have been afforded so much in life and to be able to give back is a pleasure.

It’s nice looking into the mirror everyday and seeing my tattoo— about as close as I get to seeing Darryl everyday. The chemist in me is fascinated by the world and why things are the way they are— from ionic to covalent bonds, it all can be explained or proven by careful scientific calculations and energy measurements. Bonds that will never have this type of explanation are the bonds between friends and family of today and past that flow with constancy and vigor, something no class can teach. It can only be experienced, and I am incredibly blessed to have been and always be surrounded by inspiration and love from my family and friends. These are truly the bonds that matter and hold life together.

Take the torch and carry it with you. The world needs it.

Darryl’s send off with the rest of the cousins. Glad I was Skyped in for this!

Love you and am proud of you D and will see you soon. I could write so much more but you already know how I feel (it’s definitely a twin thing).